A river and its tributaries often from a recognizable pattern known as a drainage pattern. The CXC/CSEC syllabus requires students to study dendritic, radial and trellis drainage patterns.

The dendritic drainage pattern (seen below), is the most common. 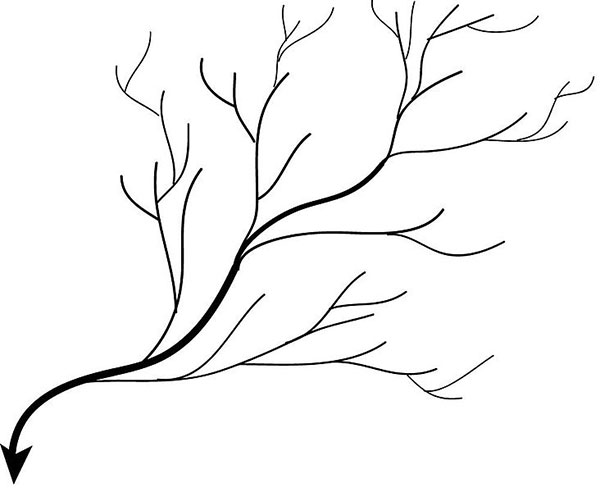 The word dendritic comes from the Greek word for tree (dendron). True to its name, this drainage pattern resembles a tree. The main river looks like the trunk of a tree, the tributaries of the main river resemble the branches and the small streams are like twigs. Dendritic drainage patterns develop in areas where the rock type is uniform and the land is gently sloping. In other words, this pattern is likely to develop wherever there are no major geological factors influencing drainage patterns. 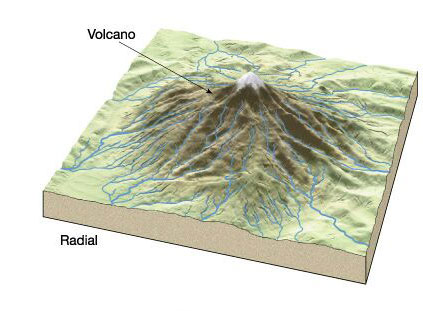 A good example of a radial drainage pattern is found in Montserrat, where rivers flow away from the Soufriere Hills volcanic centre (refer to map below). 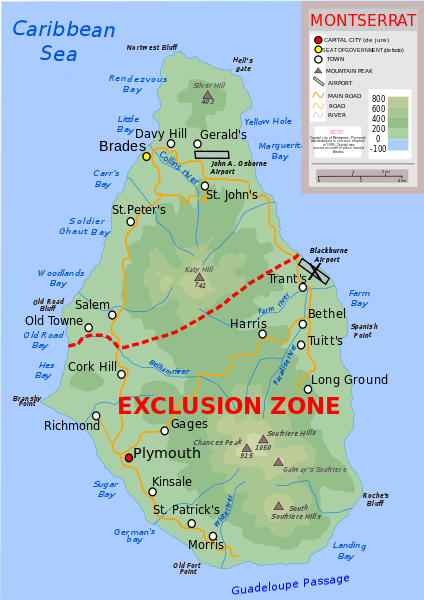 A radial drainage pattern can be seen where rivers flow away from the Soufriere Hills volcanic centre toward the sea. 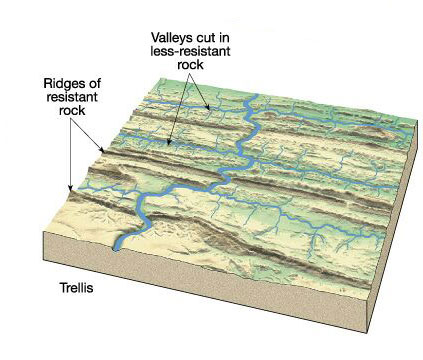 The Work of Rivers

Rivers are a powerful force shaping the landscape. They perform three basic types of work; erosion, transportation and deposition.

How does a river erode?

Erosion refers to the removal of weathered material by agents such as wind, water and ice. Running water is one of the most efficient agents of erosion and one of the most powerful. A river erodes in many ways:

Hydraulic action: This refers to the force of the water itself. Water splashes against river banks and forces it way into cracks and openings. This loosens material along the bed and banks and the river carries this material away.

Solution: Some minerals in rocks and soil are soluble. They are slowly dissolved by river water as it comes into contact with them. Examples of such minerals are salt and calcium carbonate.

Corrasion/ abrasion: As the river flows it grinds its load against its bed and banks. This loosens material which the river carries downstream.

Attrition: This refers to the process by which material being carried by the river, such as rocks and stones, collide with each other. Over time, they become smaller and smaller. They also become smooth and rounded.

Watch the video about river erosion below.


How do rivers transport material?

Solution: Materials which are dissolved in the water are carried downstream.

Suspension: Tiny particles such as silt are suspended in the water as the river flows. During periods of heavy rainfall, the water in rivers often turns brown because of all the material suspended in it.

Saltation: Particles such as small stones are bounced along the riverbed as they make their way downstream.

Traction: The heaviest material in the river’s load, such as large rocks, are simply rolled along the riverbed.

Check out this short video on transportation by rivers!