Limestone is a permeable rock. This means that water can enter limestone through pores, joints or cracks in the rock. Another characteristic of limestone is that it can be slowly dissolved by water. When groundwater or rainwater absorbs carbon dioxide, it becomes a weak acidic solution which is especially effective at dissolving limestone. Because of these simple facts, wherever limestone is in contact with rainwater or groundwater, some interesting limestone features tend to develop.

A sink hole (or swallow hole) is a natural depression or hole in the Earth’s surface commonly found in limestone areas. They are formed when joints or fissures in the rock are enlarged by carbonation or when the roof of an underground cavern collapses. Sometimes a river or stream may “disappear” down a sink hole and continue flowing underground. The photo below shows a large sinkhole located in China. 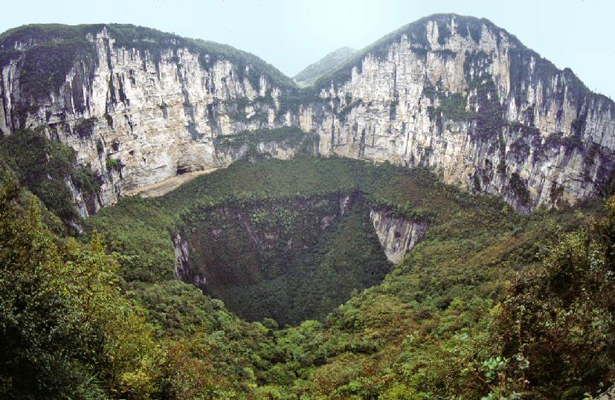 A cave is a naturally occurring underground  hollow or passage, especially one with an opening to the surface of the Earth. Caves often form in limestone areas when underground water dissolves the rock, forming tunnels passages and even large caverns. There are several caves in Barbados, the most famous of which is Harrison’s cave. Part of Harrison’s Cave can be seen in the photo below. 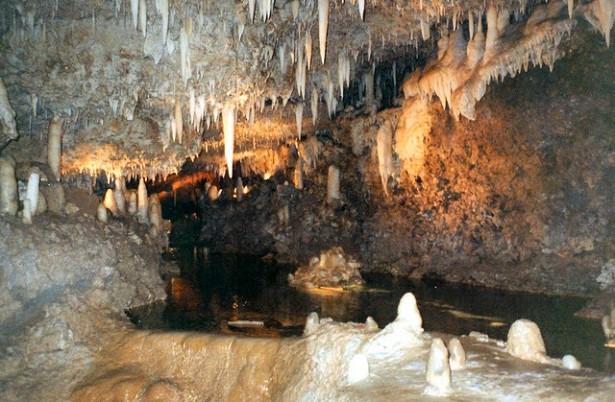 Many interesting limestone features can be found within limestone caves. Some common ones are stalactites, stalagmites and pillars.

Note: A simple way to avoid confusion is to remember that stalactite has a “c” for “ceiling” and stalagmite has a “g” for “ground”.

A stalagmite may form directly below a stalactite as water drips from the ceiling of the cave onto the floor. The stalactite may continue to grow downwards and the stalagmite may continue to grow upwards until the two limestone features eventually meet. When this happens they form a new feature known as a pillar or column which extends all the way from the ceiling of the cave to the floor. A limestone pillar can be seen in the photograph below. 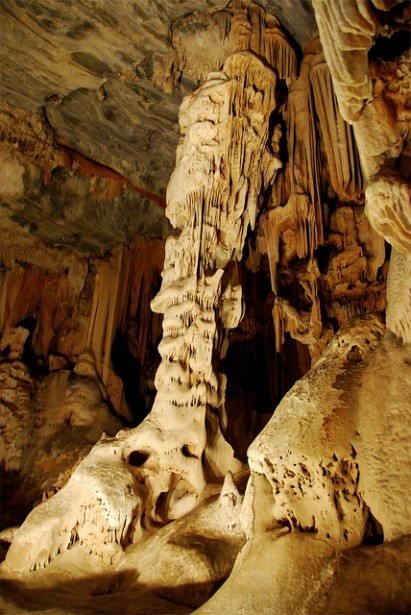 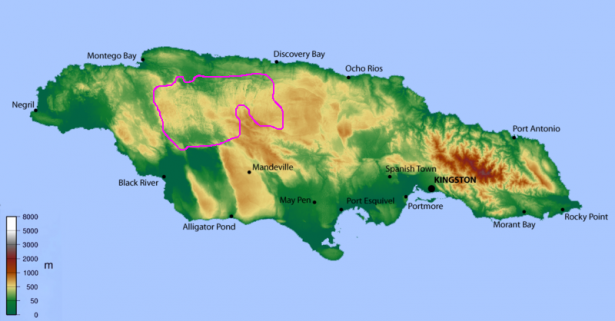 The Cockpit country is a large area with many small hills and depressions. This karst landscape was formed in an area with white limestone. In this area, the rock has many joints. These joints cross each other as some run from east to west and others run generally from north to south. Water collects in these joints. Therefore the rock near the joints is dissolved relatively quickly forming depressions. Small hills form in areas which are further away from the joints as the rock in these areas is not dissolved as quickly. The photo below shows a small part of the Cockpit Country. 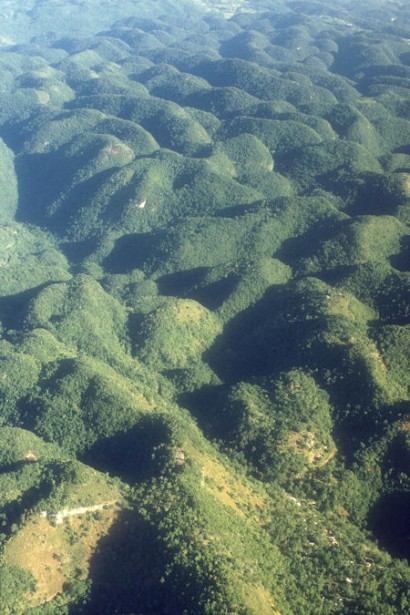 There are many caves and sinkholes within the Cockpit Country. No rivers or streams can be found on the surface  in the area because they  have all disappeared into swallow holes and flow underground through caves.