Mangrove wetlands (also called mangrove forests) can be found in tropical and subtropical regions all over the world including the Caribbean. Mangrove trees grow in coastal areas with low oxygen soils where water flows slowly. Unlike most plants, they are able to thrive in brackish water, where freshwater and saltwater mix. There are over 80 species of mangrove tree. They can usually be recognized by their prop roots which hold the trees up above the water level (see photo below). 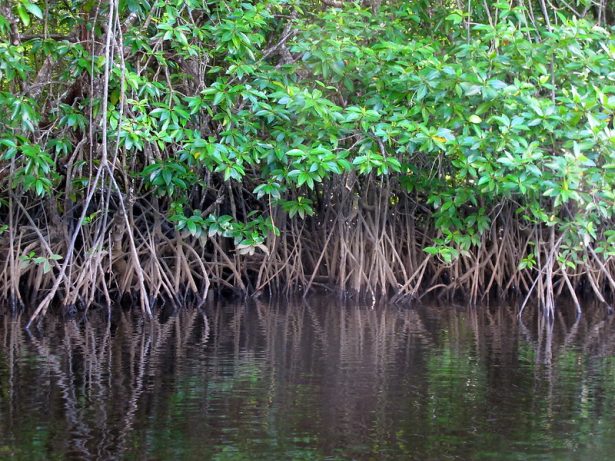 Prop roots hold the trees above the water. (Photo by Sigit Deni Sasmito and used under this creative commons license)

Mangrove wetlands are very important ecosystems because they:

Stabilize the coast: The above ground roots help to slow the flow of water, causing the deposition of sediment which would otherwise be carried into the sea. Their roots help bind the soil, preventing erosion.

Provide resources for people: Mangrove wetlands provide many resources. They are rich fishing grounds where shrimp, clams, crabs, fish and other seafood can be caught. Also, many commercial species of fish, such as the rainbow parrotfish and goliath grouper, use the mangroves as nurseries. Thus, mangroves help support fisheries in places which are quite far away from them. The wood from the trees can be used for charcoal and as a building material. The bark contains tannins which can be used for tanning leather. Various parts of the trees, such as the leaves, roots and bark can be used for medicinal purposes.

Are ideal for eco-tourism: Mangrove forests are rich in biodiversity which makes them suitable for eco-tourism. They are ideal locations for activities such as birdwatching, kayaking, paddle boarding and snorkeling. In Trinidad, for instance, Nanan’s Caroni Bird Sanctuary Tours takes visitors on boat tours through the Caroni wetlands so they can observe the mangrove and the animals which inhabit it.