A cliff is defined as a steep rock face. Where marine erosion is powerful, the coastline is eroded to form a cliff. Erosion is concentrated at sea level. A notch is cut in the rock at the level where wave attack is concentrated. When the notch is cut too far, the area above this notch collapses forming a cliff. 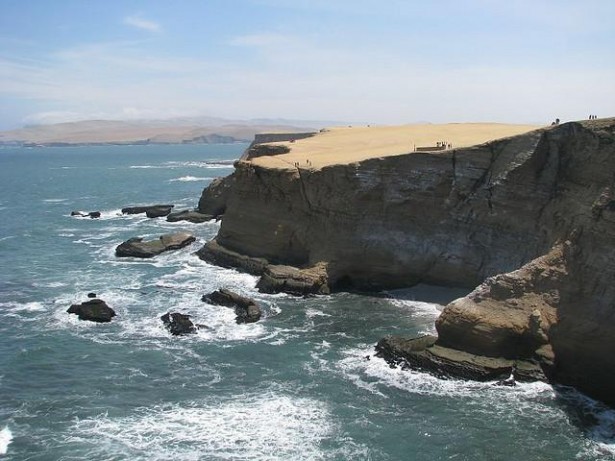 These cliffs are found on the coast of Peru

The process of erosion continues and the cliff retreats further and further back. As the cliff retreats, a flat area which is exposed at low tide is left at its base.  This feature is known as a wave-cut platform. Watch the video below which explains how wave cut platforms are formed.

Click here for a diagram showing how a wave-cut platform is formed!

In some places, there are alternating bands softer and harder rock along the coastline. As waves attack and erode the coastline, areas with softer rock will be eroded faster than areas with more resistant rock. Over time, the bands of softer rock will be worn back forming bays. A bay is an inlet along the shoreline of a body of water. The bands of more resistant rock will be left jutting out into the sea as headlands. The video below shows how headlands and bays are formed.

The rocks along the coast may contain joints, fissures or other weaknesses. These can be enlarged by wave action, eventually forming a cave. 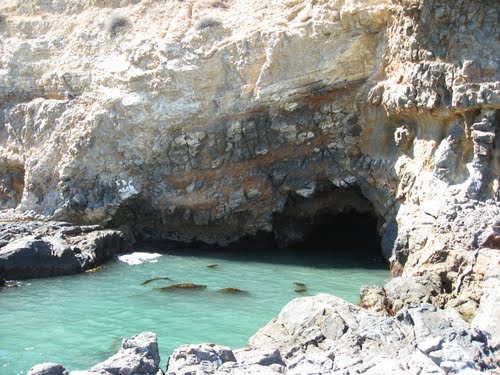 This cave is found on the coast of California, USA

If a cave is formed in an exposed headland, it may be enlarged until it runs right through this headland. The resulting feature is called an arch. Natural arches can be seen in the photos below. 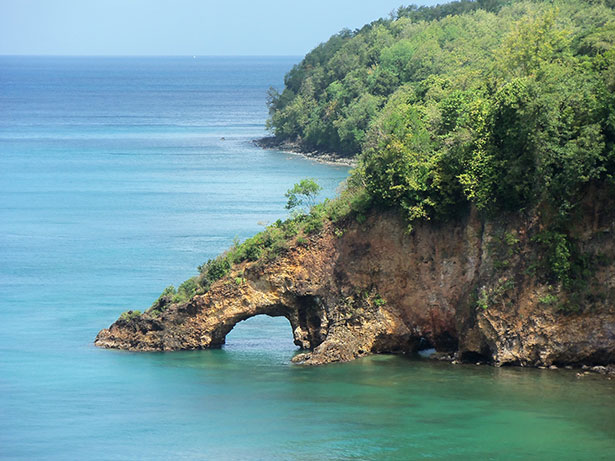 This arch is found on the west coast of St. Lucia, near the city of Castries 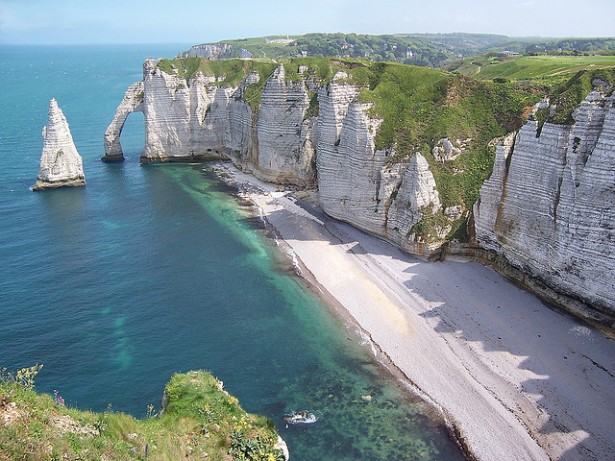 This arch is found near the village of Etretat, France

Over time, erosion may act upon the arch, widening it until the roof collapses. The piece of rock which is left stranded away from the headland is called a stack. In the picture above, a stack can be seen next to the natural arch. The diagram below shows how caves, arches and stacks are formed. 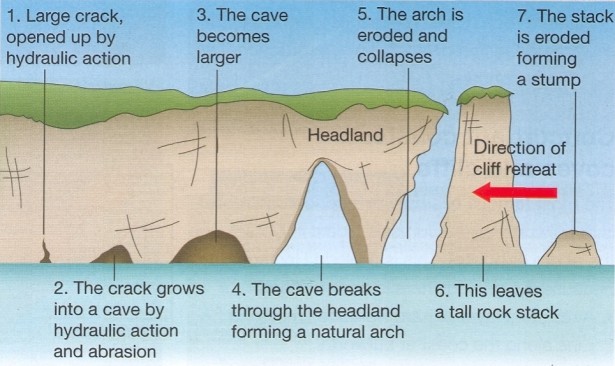 Constructive waves deposit material on the shore. Some features formed by wave deposition are: 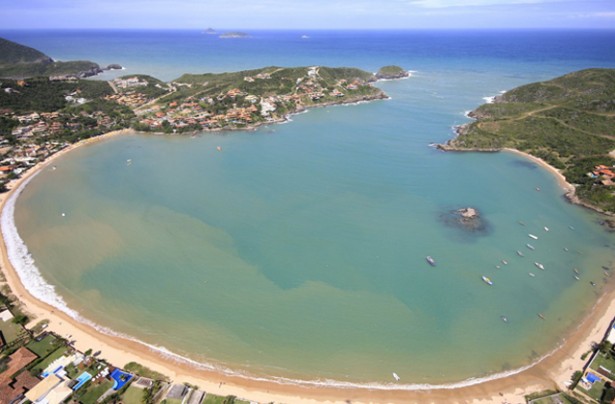 This bayhead beach is found in Buzio, Brazil

These are linear deposits of material which are approximately parallel to the coast. Some are submerged whereas others appear above the waves. They may be stabilized by vegetation and grow large enough to become barrier islands. 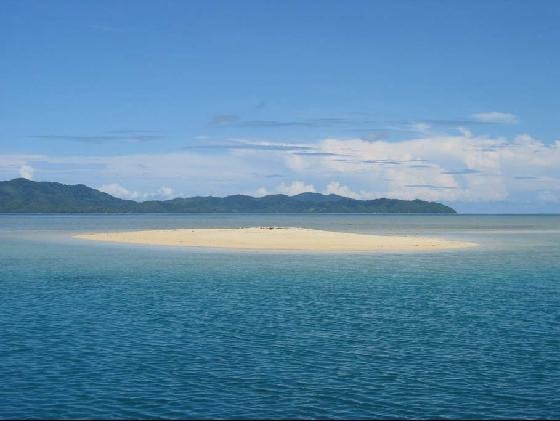 A sand bar off the coast of Barton in the Philippines

These are formed when material is deposited along the coastline  by longshore drift. They are usually linear. They are connected to the land at one end and free at the other. Spits usually form where there is a bend on the coastline. 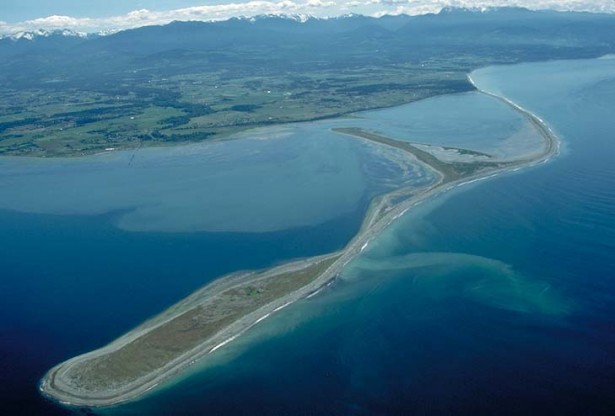 This is a linear deposit of material formed by longshore drift which joins an island to the mainland. The diagram below shows how tombolos are formed. 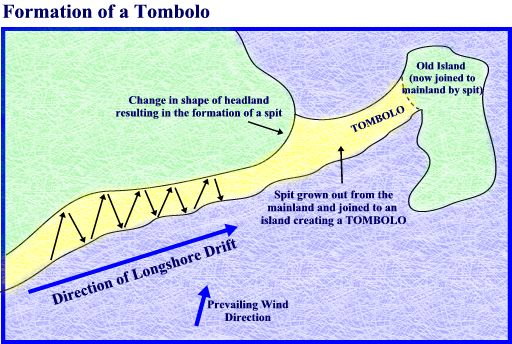 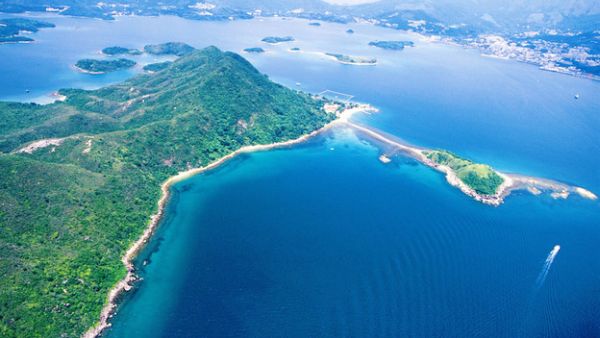 This tombolo is found near Hong Kong, China. Notice how the small island is joined to the mainland by the deposition of sand.