Roughly 70% of the Earth’s surface is covered with water. Most of this water is contained in our oceans. Some of it exists in our rivers and lakes. Much of it is frozen in the ice sheets which exist in the northernmost and southernmost parts of our planet. Some of it is found underground. Water is also found in our atmosphere as water vapour.

Through a variety of processes, water is constantly moving around the planet. Rivers flow into the oceans or lakes. Water evaporates from bodies of water (such as seas and lakes) or the land and enters the atmosphere. Some of the water in the atmosphere falls back to the Earth as rain, snow or even hail. Some water seeps into the ground to join the stores of groundwater. Some of the water in the soil is taken up by the roots of plants. Plants release water vapour into the atmosphere through their leaves. 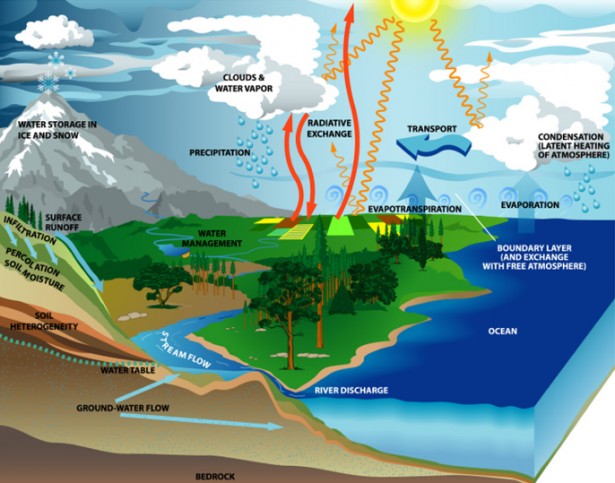 It is important to bear in mind the meaning of the following terms as they relate to the water cycle:

Take a look at this informative video about the water cycle