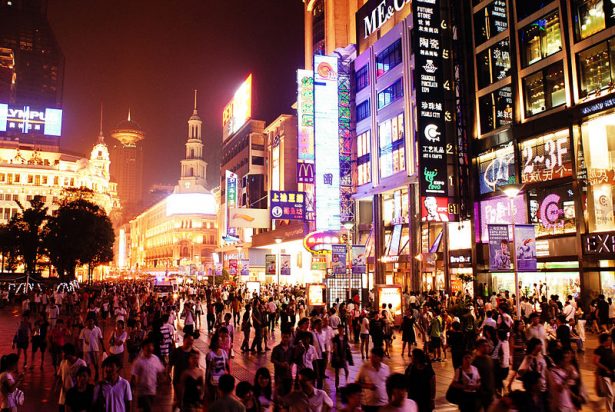 The city of Shanghai in China has the highest population of any city in the world. Over 39 million people live in Shanghai’s metropolitan area. (Photo by Mstyslav Chernov and used under this creative commons license.

By 1978, the population had grown to over 955 million. The Chinese government began to have concerns about its ability to provide for and manage its large population. It feared food shortages and the possibility of another famine like the Great Famine in which several million people perished between 1959 and 1962.

In the 1970’s, the Chinese government began to encourage its people to have no more than two children. In 1979, it introduced a policy which required most couples to have only one child. However, the official implementation of this policy began in 1980. Under this policy, couples who had more than one child could be fined. Women who were pregnant with a second child were sometimes encouraged to have abortions. Also, some women would choose to have an abortion when they discovered they were carrying a girl. This is because most couples preferred to have a boy instead.

The one child policy was successful at slowing population growth. There has been a significant reduction in the birth rate and fertility rate since 1980. The population growth rate dropped from 1.45% in 1980 to 0.62% in 2015.

However, the policy also had some negative consequences. The proportion of elderly people in the country has grown due to the drop in the number of children born. In the future many people will have only one child to bear the burden of supporting them in their old age. Also, the ratio of men to women has been affected. There are now about 30 million more men than women in China.