Volcanic activity refers to the rising of molten material within the lithosphere or onto the Earth’s surface. Volcanic activity often occurs at convergent and divergent plate boundaries resulting in a wide array of features. Some features are formed on the surface and are known as extrusive volcanic features. Others are formed below the surface and are known as intrusive volcanic features.

The CSEC / CXC syllabus requires you to know the following extrusive volcanic features: 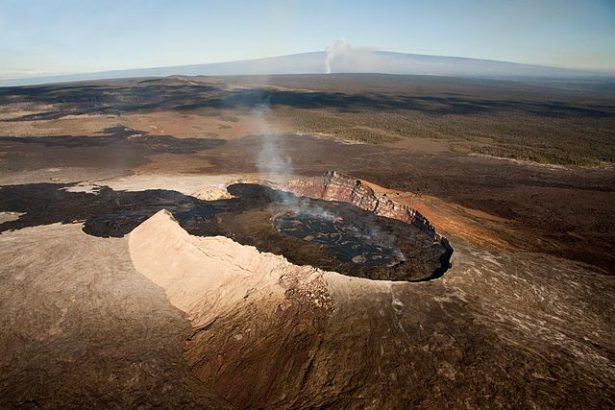 Some volcanoes produce different types of eruptions. Sometimes there are massive ash eruptions which produce layers of ash. At other times there are eruptions of lava which produce layers of lava. The lava produced by these volcanoes is viscous lava which is thick and does not flow very far before solidifying. The result of a series of eruptions is a steep sided cone composed of successive layers of ash and lava. This type of volcano is known as a composite cone. Composite cones are found near convergent plate boundaries. The Soufriere Hills volcano in Montserrat is an example of a composite cone.

Click here to see a diagram of a composite cone!

Incredibly large amounts of basalt lava may erupt from fissures and cover many square miles of land. These flows may be several thousand meters thick and they usually “drown” the pre-existing landscape and form a wide flat plateau known as a basalt plateau. Basalt plateaux are very large features, covering hundreds of thousands of square kilometers.

Click here to see part of the Columbia River Plateau in North America!

A caldera is a large volcanic depression at least one kilometer in diameter. Calderas are usually formed when a volcano empties most of the contents of its underground magma chamber in a massive eruption. This leaves the volcano with little support and causes the area around the vent to collapse inward. The result of this collapse is a massive depression. The Qualibou caldera in St.Lucia (seen below) is 3.5 km x 5 km in size and was formed more than 30,000 years ago. The town of Soufriere is located inside of it. 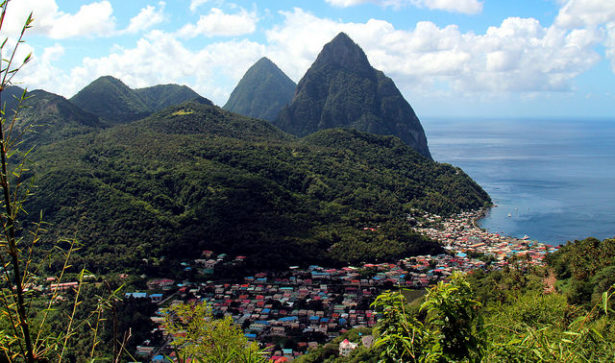 The CSEC / CXC syllabus requires you to know the following intrusive volcanic features:

A volcanic plug is formed when molten magma cools and hardens inside the vent of an active volcano. The presence of a volcanic plug can cause pressure to build up as magma tries to rise to the surface. This can result in explosive eruptions. Over time, the volcano can be worn away, exposing a volcanic plug.

Click here to see a diagram of a volcanic plug!

A sill is formed when magma flows horizontally between rock layers, roughly parallel to the surface. This molten material cools forming a horizontal sheet of solid rock called a sill.

This is a vertical sheet of rock formed when magma moving  toward the surface (through layers of rock) cools and hardens.

This is a very large feature formed when an underground reservoir of molten rock cools and hardens.

Learn about how volcanic features change over time!

The islands of the Lesser Antilles exist near a convergent plate boundary. Many of these islands were formed by volcanic activity. Active or dormant volcanoes still exist on some of them and they have the ability to erupt viscous lava. Viscous lava is thick and flows slowly. It erupts very explosively and violently. Eruptions of viscous lava have a tendency to build steep sided cones.  Eruptions are often spectacular, throwing lava and ash many miles into the air. The video below shows an eruption of the Soufriere Hills Volcano in Montserrat in 2010.

Unlike viscous lava, basic lava erupts quietly and flows easily. It may flow for quite some distance before it finally begins to solidify. Basic lava eruptions produce very broad volcanoes with gentle slopes. These volcanoes are known as shield volcanoes. The video below shows basic lava flowing from Mt. Kilauea in Hawaii in 2008.