Many islands and coastal areas located 10 to 20 degrees north or south of the equator experience a tropical marine climate. These areas include most Caribbean islands as well as coastal areas of territories such as Guyana. Central America, Madagascar, the Phillipines and parts of East Africa also experience this climate.

As the name implies, the sea has a strong influence in places which experience this type of climate. The trade winds blow all year long. In the Caribbean, for instance, the northeast trade winds blow from the Atlantic across the islands. These winds pick up much moisture over the Atlantic and often cause relief rainfall as they rise over mountainous areas in the region. Places with a tropical marine climate often experience tropical waves especially during the wet season. The Caribbean is affected by tropical waves which form as far away as Africa and cross the Atlantic before reaching the region. Places with this climate may also experience hurricanes which form over warm oceans and seas.

Regions which have a tropical marine climate experience between 1200 mm and 2000 mm of rain annually. Rainfall is seasonal to a certain extent. There are wet and dry seasons though they are not as extreme as those in the tropical continental climate. There is more rainfall during the wet season and less rainfall during the dry season. Generally, there is no prolonged period without rainfall. For this reason, some people refer to the seasons in this type of climate as the wetter and drier seasons. Regions which experience a tropical marine climate have high temperatures all year round. The annual temperature range is often quite small. However it can be up 10 degrees Celsius in areas farther way from the equator. Temperatures are higher during the wetter season and lower during the drier season. The climograph below shows the rainfall and temperature pattern of a country which experiences a tropical marine climate. 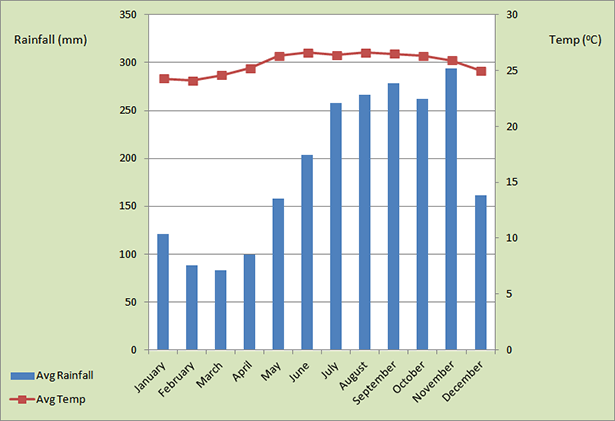 Rainfall and temperature in St. Lucia

Chemical weathering tends to produce a reddish clay soil in areas with a tropical marine climate. The soil may be quite deep. The type of vegetation which found in any particular area depends on the conditions existing there, such as the amount of moisture available and the length of the dry season. As such, there are many types of vegetation that may develop in this type of climate. Let us examine a few.

In some areas the drier season is relatively short or there is enough rainfall during the drier season to support plant growth. In these areas, the ecosystems which develop are very similar to the true rainforests which develop in equatorial climates. This is the case in the wetter parts of many Caribbean territories including St. Lucia, Trinidad, St. Vincent, Jamaica and Belize.

In some areas, the drier season is longer or there is much less rainfall in the drier season. In these areas, semi-evergreen forests tend to develop. To conserve moisture some plants in this ecosystem have small leaves. For the same reason, many of the plants in this type of forest shed their leaves during the dry season. These leaves remain on the forest floor until the wet season when the abundant moisture causes them to decompose (see photo below). 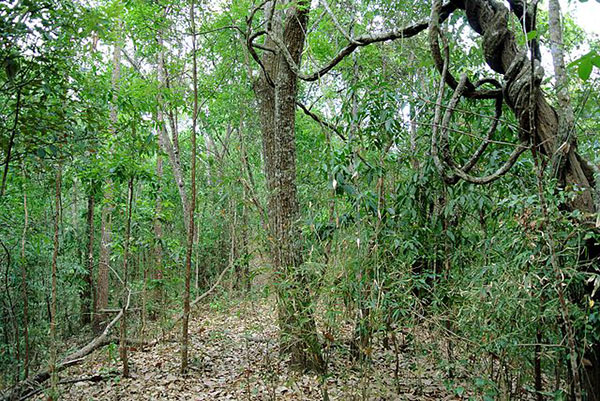 Semi-evergreen forest in Thailand at the end of the dry season. Notice the leaf litter on the forest floor. (photo by Adbar)

In semi-evergreen forests, there are only two tiers or levels of trees and there are not as many types of tree as in a rainforest. The trees are not as tall as rainforest trees and there are fewer lianas and epiphytes. . Examples of this type of forest can be found in many areas in the Caribbean including Stony Gully in Barbados, Wallings in Antigua and King’s Hill in St. Vincent.

This type of vegetation is found in the driest areas such as rain shadow areas and areas where the dry season is long or relatively severe. Plants which exist in these conditions must be able to deal with the lack of water in the dry season. Many have thick bark to conserve moisture. Many have small leaves or shed their leaves in the dry season. There are very few species of tree and the trees are usually quite small (usually less than 25 meters tall).

Tropical montane rainforests are found in mountainous regions in the tropics at altitudes of about 1000 meters or more. It is generally cooler in these regions than at lower elevations. There is more cloud cover in these areas. There is more moisture available as there is more rainfall. The ground and vegetation are often moist. Due to the abundant moisture, trees are often covered in mosses and epiphytes (see photo below). Ferns are common. 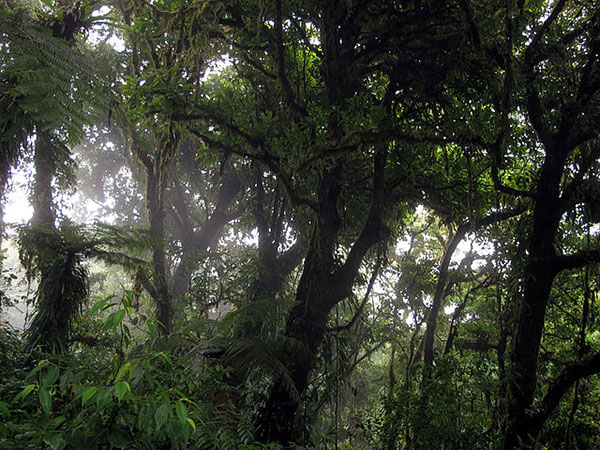 Tropical montane forest in Costa Rica. Observe how the trunks and branches of trees are covered with moss and epiphytes. (Photo by Haakon S. Krohn)

Because of the lower temperatures, trees in this type of forest do not grow as tall as trees in the forests in lowland areas. There are usually only two tiers or layers of trees.

Mangrove trees grow in areas with low oxygen soils where water flows slowly, allowing fine sediment to accumulate. Unlike many plants, they are able to thrive in saline conditions or brackish water where fresh water and sea water mix. There are over 80 species of mangrove. They can usually be recognized by their prop roots which hold the trees up above the water level. Mangrove forests can be found in coastal areas in tropical and subtropical regions.

Mangrove forests are very important ecosystems. Their roots help stabilize the coastline by holding the soil in place. Their roots also serve as a breeding ground or a habitat for many aquatic animals including many species of fish and invertebrates such as crabs and shrimp. Because of this, mangroves help support the fishing industry. The trees also provide a habitat for many birds and other animals. Mangrove forests also help protect the coast from wind and waves during storms. Also, wood from the trees can be used as fuel and as a building material. 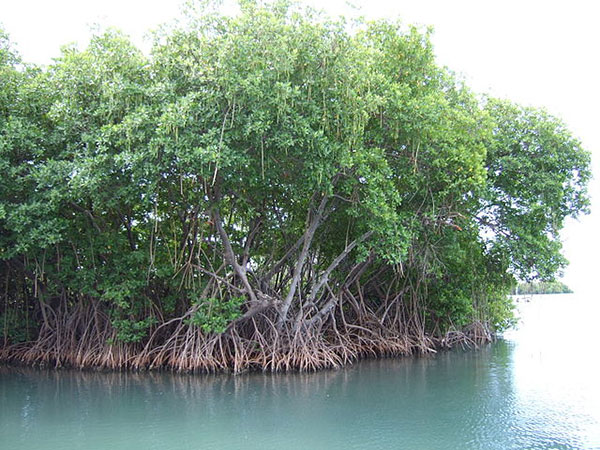 A distinctive type of vegetation tends to develop along beaches. While many soils  are able to retain water to support plant growth, water drains very easily through sand. The sand does not contain many nutrients and it has a high salt content. The plants which grow along our beaches must be specially adapted for dealing with these conditions. Unlike many plants, they are able to tolerate the high levels of salt. Many have small or waxy leaves to reduce water loss. Others are able to store water in their stems or root systems.

The plants which grow closest to the sea (just above the high tide line) are called coastal pioneers. These plants are able to thrive in the harsh and unstable conditions near the sea. Many of these plants, such as seaside bean and beach morning glory, grow by creeping along the ground. Others are grasses such as seashore paspalum.

A little farther from the sea, the soil is more stable and some humus is present. In this zone, there are still some grasses and creeping plants like those mentioned before. There are also many woody plants such as fat pork and bay cedar. These woody plants may grow clustered together forming a hedge.

Still farther from the sea, along with many varieties of woody shrubs, trees are found. Among the trees often found in this zone are sea grape, seaside maho and the poisonous manchineel tree.