Many regions close to the equator experience an equatorial climate. These regions include, the Amazon Basin (South America), the Congo Basin (Africa), Malaysia, Indonesia and some areas in northern Australia.

Another major characteristic of this climate is the high rainfall. These regions usually experience 2000 mm of rainfall or more in a year. Rainfall is high for most of the year. Many equatorial regions are affected by the ITCZ. As the ITCZ passes over these areas it brings heavy rainfall and thunderstorms. In some areas, the ITCZ causes two periods of very heavy rainfall every year. One occurs when the ITCZ crosses these areas on its way north and another occurs when it crosses these areas again on its way south. The climograph below shows the rainfall and temperature pattern of an area which experiences an equatorial climate. 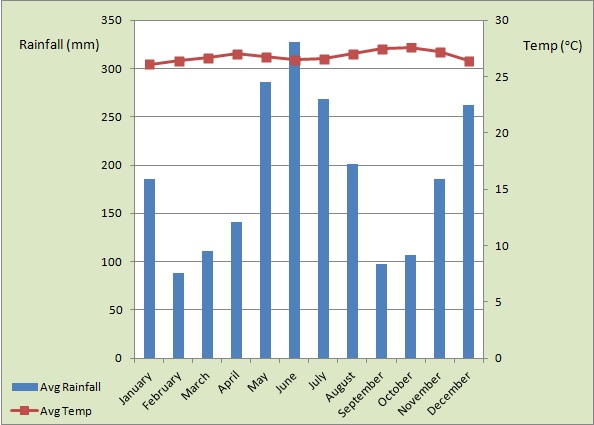 Rainfall and temperature in Georgetown, Guyana

Vegetation and Soil in Equatorial Regions

In equatorial regions, the year round high temperatures and abundant rainfall support plant growth all year round. These areas usually have equatorial rainforests. These forests have very dense vegetation. Many different types of trees and other plants can be found growing in a relatively small area of rainforest. More species of plant can be found in a rainforest than in other type of plant community. Four square miles of rainforest may contain as many as 750 species of tree and 1,500 species of flowering plant. Rainforests cover only about 6 percent of the Earth’s surface. However, they contain about half of the world’s known animal species and provide about 40% of the world’s oxygen.

There are several layers of vegetation in a rainforest. The uppermost layer is made up of the  crowns of the tallest trees. These trees are known as emergents. They are much taller than most trees in the rainforest and their crowns are exposed to the direct sunlight.  Some trees such as the kapok may reach heights greater than 200 feet (61 meters).

Below the canopy is another layer known as the understory. Trees in this layer are only a few meters high. Here one can find trees which only grow to about 15 meters at maturity as well as young saplings which will eventually grow to reach the canopy. Sunlight here is limited.

Between the understory and the forest floor lies the shrub layer. It is composed of small plants such as ferns and small shrubs. Only about 1% or 2% of sunlight reaches this layer. Therefore, few plants are able to thrive there. The few plants which grow here must be able to tolerate low light conditions. It is easy to walk through the rainforest because the area near ground level is relatively free of vegetation. The diagram below shows the layers of the rainforest.

Layers of the rainforest

In rainforests, a layer of leaf litter can be found on the forest floor. Because of the moisture, high temperatures and the many decomposers, these leaves and any other organic matter decay very rapidly. Their nutrients are returned to the soil where they are taken up by plant roots. In this way, nutrients are recycled quickly and efficiently in rainforests.

In many tropical areas, chemical weathering has produced a deep, reddish clay soil known as a latosol. The soil itself is not very fertile. However, in a rainforest, there is a continuous supply of leaves, animal droppings and other organic matter which are quickly broken down with the help of decomposers and incorporated into the topsoil. Because of this process, the soil in the rainforest is able to support the dense vegetation. However, once the vegetation is removed, the soil quickly loses its fertility. Watch the video below for more information on latosols.

Ways in which plant life has adapted to conditions in a rainforest:

The trees of the rainforest have adapted to the high temperatures and heavy rainfall in equatorial regions. The leaves are often dark green and thick to protect them from the intense sunshine. They often have pointed tips called drip tips which allow rain water to drain off quickly. Rainforest trees do not need thick bark to prevent moisture loss. Therefore their bark is usually thin and smooth.

Many trees are tall and have a relatively straight trunk.The branches and leaves are concentrated near the very top of the tree to maximize the amount of sunlight they receive. Having leaves on the lower parts of the trunk would not be very useful as very little sunlight would reach them.

In order to support their great height, many trees have buttress roots (also called plank buttresses) which extend above the ground and along the trunk  on all sides. The buttress roots of a tree can be seen in the photo below.

Notice the large buttress roots of this rainforest tree.

Apart from the trees, many other forms of plant life can be found in a rainforest. They have adapted to life in a rainforest as well. Some plants in the lower layers of the rainforest have very large leaves in order to make efficient use of the little sunlight which reaches them. Some plants, known as lianas, are vines which are rooted in the soil and grow up the trunks of trees all the way into the canopy where their leaves can get more sunlight.

Some plants, known as epiphytes, grow on trees (their roots are not in the soil). They do not harm the trees and they do not get their nutrients from them. They only use the trees for physical support (see photo below).

There are other plants which are parasites. They grow on other plants and get their nutrients from them, damaging them as they do so.

The video below provides information about plant life in a tropical rainforest.