The term “weather” refers to the atmospheric conditions which exist in an area at a particular time. The weather in a particular location can change from day to day or even within a few minutes. If you speak of how rainy it was this morning or how hot it was yesterday, you are speaking about the weather. Climate refers to the general atmospheric characteristics expected to prevail in a particular place. We learn about the climate of an area by studying weather patterns in that area over a 30-35 year period. It is important for Geography students to know the difference between weather and climate.

The Elements of the Weather

There are a number of elements which make up the weather. They are:

Temperature: This refers to how hot or cold the atmosphere is. It is measured in degrees Celsius or degrees Fahrenheit. Temperature is measured using a thermometer. When discussing the temperature of various areas, it is important to understand the following terms:

Sunshine: Sunshine is the term used to refer to direct sunlight. It is measured in hours. The instrument used to determine the amount of sunshine experienced in an area in a day is a Campbell Stokes Sunshine Recorder (seen below).

In the photo above, notice the card which is under the glass sphere. The sphere focuses the rays of the Sun onto a point on this card, burning a small hole at that point. As the Sun moves across the sky its rays are focused on different parts of the card. At the end of the day, the card can be examined to determine the amount of sunshine the area experienced on that day. An entire day of sunshine will create one long, unbroken burn on the card. A day with many cloudy periods will create several small burns with spaces in between them. The spaces represent periods when there was no direct sunlight.

Precipitation: This term refers to the various ways in which water falls from the atmosphere to the ground. This includes rain, snow and hail. Rainfall is measured in millimeters using a rain gauge. The amount of precipitation that an area receives has a major impact on the vegetation and soil in that area. Some areas receive very little precipitation while others receive very much. In some areas rainfall is seasonal, while in others it rains throughout the year.

Winds: Winds blow from areas of high pressure to areas of low pressure. We are concerned with two aspects of wind; its direction and its speed.

Wind direction is measured using a wind vane or wind sock. As the wind blows, these instruments turn to indicate wind directon. Winds are named according to the direction that they blow from. For instance, an easterly wind is a wind which blows from the east.

Clouds: Clouds form when water vapour condenses in the atmosphere. When air rises, it cools. A rising current of air is called an updraught (also spelled updraft). As the air cools, its ability to hold moisture is reduced. The water vapour in the rising air condenses, forming clouds. When discussing clouds, we are concerned with cloud cover and cloud type.

Cloud type: There are many types of clouds. Clouds are named according to their appearance. The three basic cloud types are cirrus, cumulus and stratus.

A distinct type of cloud is the cumulonimbus cloud. This type of cloud forms when very strong updraughts rise high into the atmosphere forming very tall clouds. The top of this type of cloud may spread out, giving the cloud an anvil shape. Cumulonimbus clouds produce heavy rain and thunderstorms. The diagram below shows various cloud types as well as the altitudes at which they form. Click to enlarge the image. 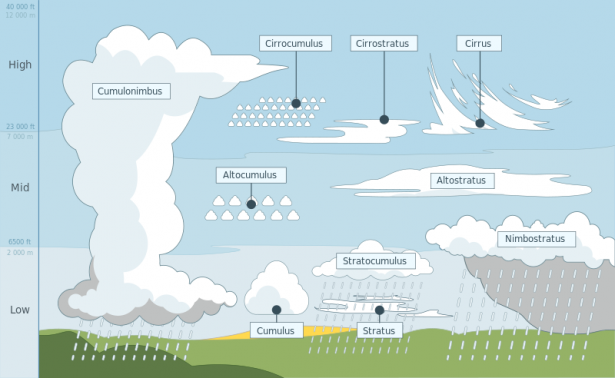 The CXC/CSEC Geography syllabus requires students to study some of the major weather systems which affect the Caribbean. Students are also required to study the climate of equatorial, tropical continental and tropical marine regions. Students must also understand how relief affects climate.

Move on to Relief and Climate!