On many maps one can see a number of vertical and horizontal lines. These line crisscross each other to form a neat pattern of squares known as a grid. This grid covers the entire map. Take a look at the grid below. It is similar to the ones you will see on a typical map. 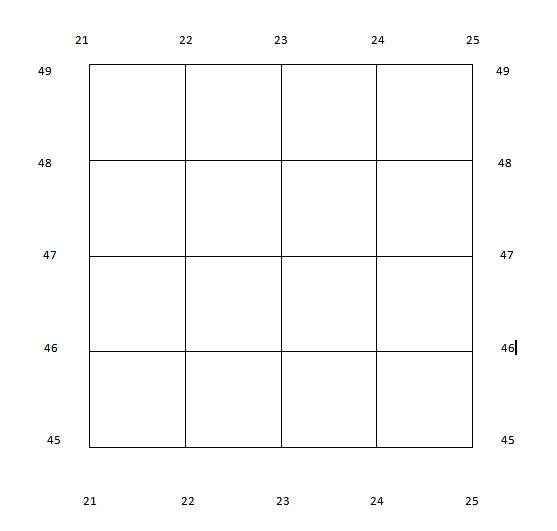 The vertical lines, which run from north to south (e.g. 21 and 22) , are known as eastings.  The horizontal lines, which run from east to west (e.g. 45 and 46), are known as northings. Every easting and northing has its own two digit number which can be found at either end of it. Eastings increase in value as one moves to the right (toward the east) on the map. Northings increase in value as one moves toward the top (the north) of the map. Each square on the grid is known as a grid square. One can give the location of an object or objects on a map by naming the grid square in which it is located. Lucky for you, it is a very simple process.

Look at the grid below. One square has been shaded. How can you easily identify this square? 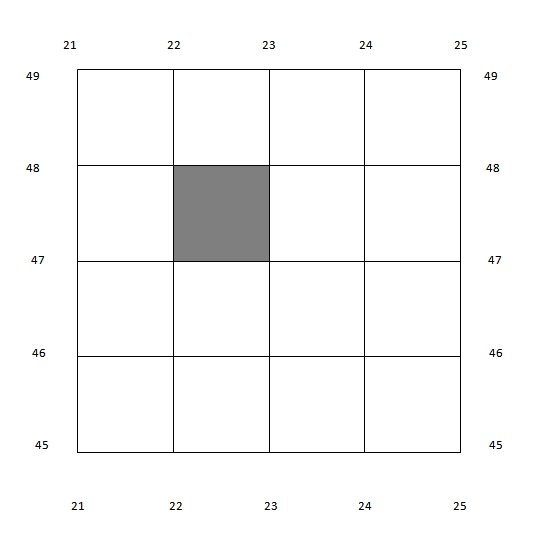 A simple way is to give the four figure grid reference for that square. This is done by stating the number of the easting which runs along the left side of the square (in this case 22) followed by the number of the northing which runs along the bottom of it (in this case 47). Therefore 2247 is the four figure grid reference for this entire grid square or anything inside of it. It is important to note that the easting must always be stated first, followed by the northing. Simply put, the vertical line comes before the horizontal line, like when you write a capital “L”. Also you must not leave a space between the easting and the northing. Furthermore, a grid reference must not contain dots, commas, hyphens (or any other crazy stuff for that matter).

In other words, the four figure grid reference for the square shaded in the grid above or anything which is inside of that square is simply 2247.

NOT 22,47 (This is wrong because a grid reference should not contain commas)

Always remember, that to give the four figure grid reference for an object, you must state the number of the easting immediately to its left followed by the northing directly under it.