Coral reefs are very important ecosystems which support large communities of living things. They also support the livelihoods of many people in the fishing industry. They are an important asset to the tourism industry as well. In recognition of these facts, many countries around the world have taken steps to protect their coral reefs. The island of St. Lucia is one such country. 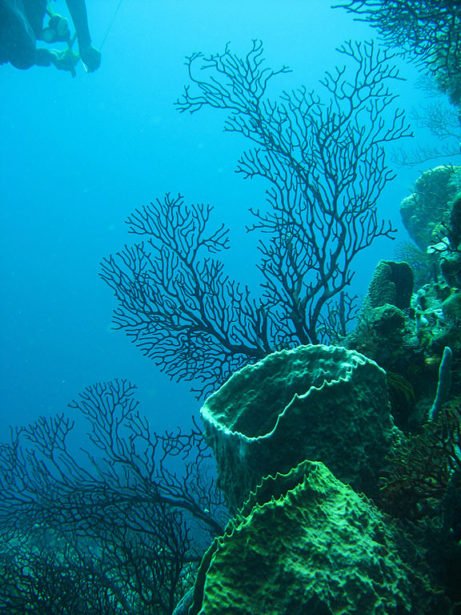 Photo of coral and sponges just off the coast of Soufriere, St. Lucia. Photo taken by Lauretta Burke and used under a creative commons license.

There are several fringing reefs around the island of St. Lucia.  Some of the steps taken to protect them include:

The Minister responsible for fisheries has the authority to declare any part of the fisheries to be a marine reserve according to the Fisheries Act of 1984. Anyone found guilty of conducting illegal activity in a marine reserve, such as damaging coral, may have to pay a fine of up to five thousand  Eastern Caribbean Dollars (about US $1850).

Some destructive fishing methods can harm the marine environment, including coral. Some of these methods have been declared illegal. These include the use of poison and explosives. Anyone found guilty of using these methods may be fined up to five thousand EC dollars.

Several marine protected areas have been established by law. These include the Point Sable Environmental Protection Area (PSEPA) in the south and the Soufriere Marine Management Area (SMMA) in the west of the island.

In the SMMA, marine spatial planning is used to determine where activities such as fishing or recreational diving can take place. Marine areas are divided into zones such as  yachting areas, fishing priority areas, recreational areas and marine reserves. The activities which are allowed to take place in each type of zone is regulated. Marine reserves have been established to protect certain areas where coral reefs exist. No fishing is allowed in these reserves. However, recreational diving may be allowed. A map of the Soufriere Marine Management Area can be seen below. 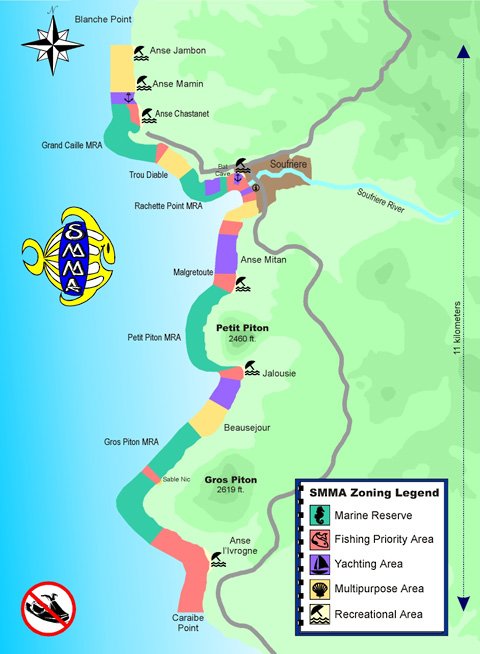 Special thanks to the SMMA for providing this image.

St. Lucia has signed on to a regional agreement known as the Cartagena Convention. This is a legal agreement aimed at protecting the Caribbean Sea, the Gulf of Mexico and parts of the Atlantic Ocean near the Caribbean. This agreement seeks to preserve wildlife and specially protected areas. It seeks cooperation in dealing with oil spills in the wider Caribbean. It also seeks to reduce the pollution of the Caribbean sea from land based sources.

St. Lucia is a party to the Convention on International Trade in Endangered Species of Wild Fauna and Flora (CITES). This is an international agreement between various governments. Many species are collected and traded across international borders every year. If left unchecked this can result in some species becoming endangered or extinct.  CITES aims to ensure that various species of plants and animals (including coral) are not threatened because of international trade.

Special thanks to Ms. Nadia Cazaubon, Program Director at Caribbean Student Environmental Alliance, for providing information and assisting with the research for this page.