Climate Change in the UK

The climate of the UK is described as maritime (influenced by the sea or ocean), moist and temperate. Annual precipitation is usually between 800 mm and 1400 mm. Global warming is predicted to have a major impact on climates all over the world. Over the last three decades, the UK has become 0.9 degrees Celsius warmer. Climate change, brought about by rising global temperatures, has already began to affect the UK.

Consequences of climate change in the UK

More frequent heatwaves: As global temperatures increase, the UK can expect to experience more frequent heatwaves during the summer. In August 2020, the UK experienced its longest ever stretch of extreme heatwave temperatures. On July 19th 2022, a temperature of 40.2 degrees Celsius was recorded at Heathrow, breaking the previous record of 38.7 degrees Celsius measured at Cambridge in 2019. Heat waves can pose serious risks to life and health. Over 800 people are estimated to have died in the UK as a result of the heat on July 18th and 19th 2022.

Drought: Summers in the UK are becoming drier. Summer rainfall has been decreasing. This will likely cause more frequent droughts and water shortages in the future.

Sea level rise: Sea level rise caused by global warming is expected to impact coastal areas in the UK. Rising sea levels pose a greater risk of coastal flooding and coastal erosion. In Norfolk, houses have been destroyed by coastal erosion. Coastal railway lines have been damaged in places such as Cornwall and Devon. Experts believe that some coastal settlements, such as the village of Fairbourne, may have to be relocated. The video below provides more information.

Effects on wildlife: Rising temperatures are likely to cause disruptions in many of the UK’s ecosystems which could threaten many species of animals and plants. For instance, hotter and drier summers may cause some grasslands to dry up. Many species of birds and insects are adapted to cooler climates and would struggle as temperatures rise. Ecosystems such as coastal wetlands may be damaged or destroyed as sea level rises.

Rising sea temperatures will also affect marine ecosystems. Fish and other marine animals adapted to cooler temperatures may be driven away along with seabirds and other animals which feed on them. In addition, more frequent floods, droughts and wildfires would directly impact wildlife as well.

Note: Apart from the negative consequences listed above, climate change may bring benefits to the UK such as warmer winters and a longer growing season for crops.

Measures to reduce the effects of climate change in the UK

Legislation: The UK passed the Climate Change Act in 2008. This Act originally aimed to reduce carbon emissions in the UK by 80% by 2050. It was amended in 2019 and now the goal is to achieve net zero carbon emissions by 2050.

Vehicle Tax: The yearly tax rate on vehicles is based on the carbon dioxide emissions of the vehicle. The tax for very fuel efficient vehicles is relatively low. Higher taxes are paid for vehicles which are less fuel efficient. No tax is paid for electric vehicles. This is meant to encourage people to drive vehicles that produce less pollution.

Increasing production of renewable energy: The UK government has provided support for renewable energy in an effort to move away from burning fossil fuels. In 2020, 42% of the UK’s electricity was generated from renewable sources such as wind and solar. There are currently 11,000 wind turbines onshore and offshore. They generate almost a quarter of the electricity supply in the UK. The photo below shows an offshore windfarm in the UK. 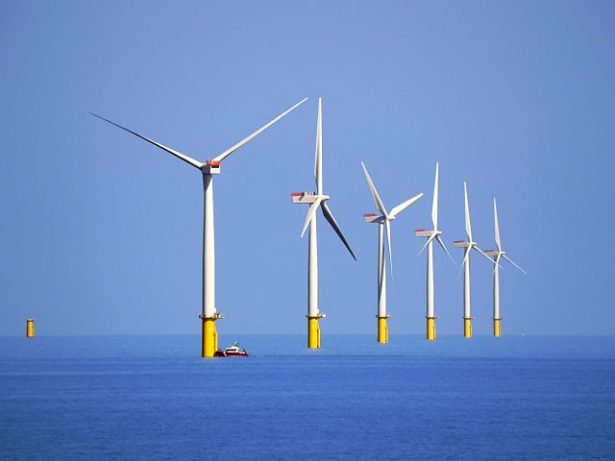 The Walney Extension Offshore Wind Farm is located in the Irish Sea . (Photo by David Dixon and used under this creative commons license)

Over 1 million homes in the UK have photovoltaic systems installed. Solar panels generate electricity which can be used in the home. Any additional electricity which is generated goes into the power grid and the homeowner receives payment for it.