Causes and Consequences of Deforestation 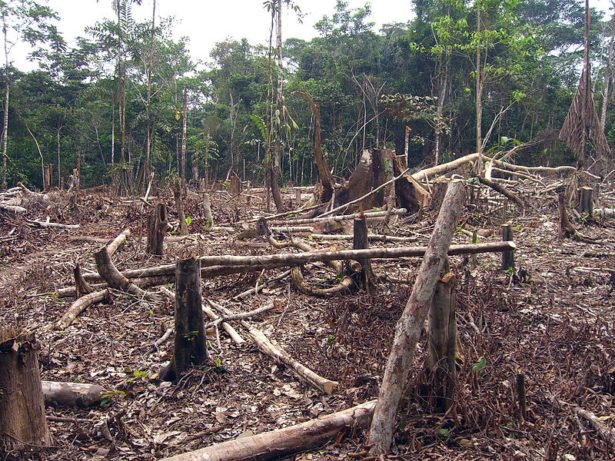 Commercial Agriculture: Early European settlers in the Caribbean cleared much of the forest in order to establish plantations where crops such as sugarcane were grown on a large scale. The mountainous areas in the interior of some islands remained forested as these areas were not suitable for plantation agriculture.

Peasant or Subsistence Agriculture: Small scale peasant or subsistence farmers sometimes clear small areas within forests so they can use the land to grow crops. This is often done on steeper slopes not suitable for large scale commercial agriculture.

Wood is a valuable resource. Forested areas are sometimes cleared to obtain it. The wood of many species of tree can be especially valuable. These trees are sometimes selectively harvested. There is commercial logging in some Caribbean territories such as Guyana and Belize.

Use of wood for fuel

In many countries, people rely to some extent on wood as a source of fuel for heating and cooking. In many Caribbean countries, trees are cut down and used to make charcoal.

When mineral resources are discovered in an area, forested areas may be cleared in order to gain access to them. For instance, the discovery of bauxite in Jamaica led to substantial deforestation. In order to mine the bauxite in an area, the vegetation in that area is completely removed. Also additional forested areas may be cleared to build roads to provide access to the mines.

Some settlements tend to grow larger over time. Sometimes they expand into areas which were once covered in forests. The forests are cleared to make way for more houses. Also sometimes, squatters will clear areas within the forest and build homes although they do not own the land.

In forested areas, the trees protect the soil. Removal of forest cover exposes the soil to the elements and makes it much easier for soil erosion to take place. During periods of heavy rainfall, exposed soil is simply washed away, often into streams and rivers, and carried downstream or into the sea.

The extensive roots of large forest trees help to hold the soil in place. In areas where forest cover has been removed, heavy rainfall during storms can lead to major landslides. These landslides often block roads, destroy buildings and claim lives.

Trees help water infiltrate the soil. When it rains in a forested area, much of the rain falls onto the trees and then slowly drips onto the forest floor and enters the soil. Some of the water runs down the branches and trunks of trees and then into the soil. When forest cover is removed rain falls directly onto the soil and much of it quickly runs off into streams and rivers. This can lead to increased flooding when it rains heavily. Deforestation often causes floods to become more frequent and worse.

Removal of forest cover leads to greater surface runoff and less water entering the soil. This leads to a reduction in groundwater. This means there is less groundwater flow to replenish rivers and streams during drier periods. This can cause the water level in streams and rivers to be greatly reduced during dry periods. Some rivers may dry up completely.

Since water from rivers is used to supply water to many of our homes, this can lead to interruptions in our water supply especially in the dry season. The reduction in groundwater also means that there is less water available for people who obtain water from wells.

Tropical rainforests are some of the most biodiverse places on the planet. Although they cover only about 6% of the earth’s surface, they contain about half of the world’s known animal species. Hundreds of different species of trees and other types of plants can be found growing in a few square kilometers of rainforest. Deforestation causes a massive loss of biodiversity and often leads to the extinction of various forest creatures.

Watch the video below which outlines some of the causes and effects of deforestation.