Coral reefs are undersea ridges composed mainly of calcium carbonate. They are built by tiny creatures called coral polyps. You can click here to read more about coral reefs. 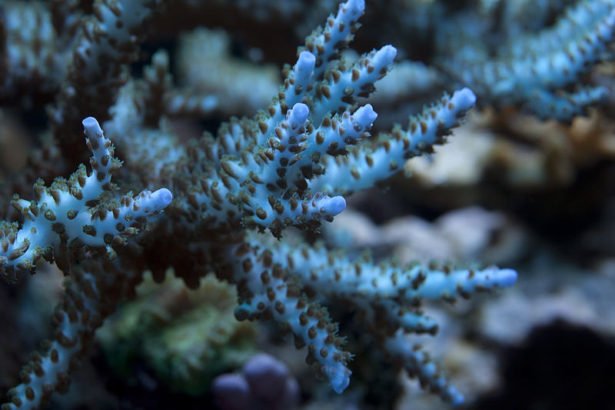 This is healthy blue acropora coral. The tiny dark specks are coral polyps. Photo by Will Thomas (used under a Creative Commons license)

In many places around the world, coral reefs are being damaged or destroyed. In the Caribbean, it is estimated that about half of coral cover has disappeared since  the 1960’s. Some of the causes of coral reef destruction include:

Sometimes, the actions of people can cause harmful chemicals to be released into the sea. For instance, pesticides and fertilizers from agriculture are often washed into rivers which carry them to the sea. Also, sewage is sometimes released into the sea. Pollutants which are rich in nutrients can fuel the growth of algae which can outcompete coral. They can also harm coral directly. For instance, some microorganisms found in sewage are known to cause disease in coral.

When sediment is deposited onto coral reefs it interferes with their ability to feed and grow. Large amounts of sediment deposited onto a coral reef can actually kill the coral. Sadly, there is an increase in the amount of sediment entering the sea because of human activities such as dredging and deforestation. When forest cover is removed, heavy rains can wash sediment into rivers which then carry it into the sea. This can cause damage to coral reefs.

Some fishing practices, such as the use of seine nets or explosives, can damage coral reefs. Boat anchors also cause damage to coral reefs. Overfishing can reduce the number of algae eating sea creatures which keep the coral reef clean. This can cause an increase in algae which can outcompete coral.

Tourists as well as locals, who visit coral reefs for recreational purposes, such as scuba diving or snorkeling, sometimes damage the reefs. Some people break off pieces of coral to keep as souvenirs. In some places people engage in the practice of walking on coral reefs which also causes damage to the coral.

Because of its location, the Caribbean region often finds itself in the path of tropical storms and hurricanes. The winds generated by these weather systems create powerful waves which pound coastal areas and often cause major damage to coral reefs.

Global warming can cause “coral bleaching”. Most coral polyps have a mutualistic relationship with photosynthetic algae that live inside of them. The coral polyp gives the algae a protected environment in which to live. In return, the algae provides the coral polyp with some of the nutrients it produces during photosynthesis. When sea temperatures are too high, coral polyps expel their algae and this may cause the polyps to die. The coral appears white and is said to be “bleached”. 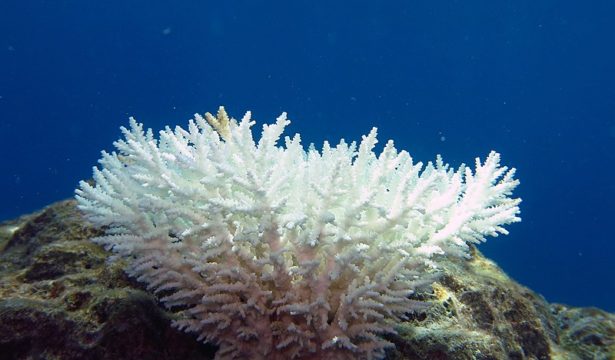 A rise in sea temperatures is also predicted to cause an increase in the number of hurricanes we experience. Furthermore, an increase in the amount of carbon dioxide in sea water can weaken the calcium carbonate shells of coral polyps. Global warming is now seen as a major threat to the survival of coral reefs. If current trends continue, it is estimated that coral reefs may be extinct by the end of this century.

Several different species of coral may inhabit one coral reef. Coral reefs support large communities of marine creatures. Many different creatures depend on coral reefs for their survival including many species of fish, crustaceans, mollusks, sea urchins and starfish to name a few. Many find shelter within the reef. Some eat algae that grows on the reef. Others feed on other animals that inhabit the reef. Some even eat the coral itself. If coral reefs are destroyed, many of the species that depend on them for survival may disappear.

Tourism is a major foreign exchange earner in many Caribbean countries. Many tourists visit the Caribbean hoping to go snorkeling or scuba diving so they can enjoy the beauty of our coral reefs and the creatures that inhabit them. If our coral reefs are destroyed, these tourists may choose to go elsewhere.