Mass wasting (also known as mass movement) refers to the movement of weathered material downslope because of the influence of gravity. There are many forms of mass wasting. The CSEC / CXC syllabus requires students to study the following forms: soil creep and landslides.

This is a very slow but generally continuous movement of soil downslope. It is most common in damp soils where water acts as a lubricant. This allows soil particles to move over each other and the underlying rock. Eventually, the movement of soil tilts fences, posts and even trees. Soil accumulates behind walls and other obstacles and also at the foot of slopes. Cracks appear in roads in areas where soil creep is taking place. 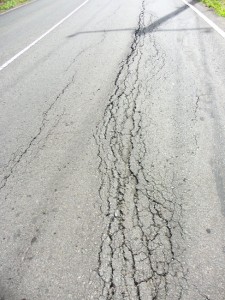 Click here for a diagram showing the effects of soil creep!

Soil creep occurs in moist soils where the water acts as a lubricant. It is more likely to occur on steeper slopes and in areas where the soil is thick. It may also be caused by the alternate wetting and drying or alternate freezing and thawing of the soil.

A landslide is a sudden movement of rock or soil downslope under the influence of gravity. They can have devastating consequences on the environment and all who inhabit it. Landslides can block roads and railways, dam rivers, destroy buildings or even bury entire villages. In October 2010, during Hurricane Tomas, the district of Soufriere (St. Lucia) experienced some devastating landslides. The landscape was scarred, roads were blocked, many houses and other buildings were damaged or destroyed and lives were lost as a result of them. Landslides are more likely to occur under the following conditions:

• On steep slopes: steep slopes are more likely to experience landslides than gentle ones.

• Where there is a thick layer of unconsolidated material on the slope (such as sand, clay or volcanic ash). If this layer becomes saturated during a period of heavy rainfall, a landslide may occur.

• Where there are rocks like shale or clay which become slippery when wet: Any material above a layer of shale, clay or a similar material can slide off very easily when they are wet.

• Heavy rainfall: This saturates the soil, making it heavier. It also reduces friction. Rainfall increases the possibility of landslides in areas where the previously mentioned conditions exist.

• Earthquakes and volcanic eruptions cause vibrations in the ground which sometimes trigger landslides.

Man increases the chance of landslides in the following ways:

• Removing vegetation from steep slopes: This makes landslides more likely as there are no roots to hold the soil in place.

• Undercutting the base of slopes to build roads.

Watch these videos of landslides and then take the Weathering and Mass Wasting Quiz!